Consumers Choose to Step Up and Step Out 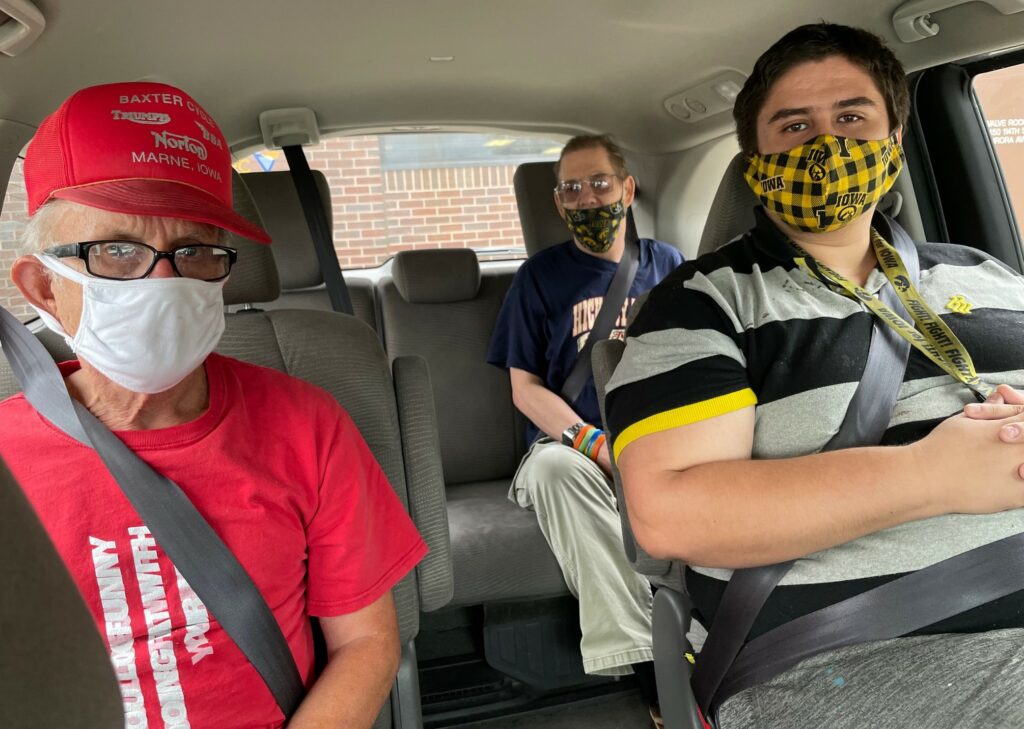 Central Iowa consumers Ronnie, Sam and Craig are masked up and ready to volunteer at the Greater Des Moines Habitat for Humanity Restore.

It’s a Wednesday afternoon in July at Vodec’s Urbandale Development Center. While a group of consumers on the activity floor get ready to make paper ice cream cone art topped with real sprinkles, Sam, Ronnie and Craig head to the parking lot, where they load into a Vodec van for a short trip to the Greater Des Moines Habitat for Humanity Restore.

The place is a treasure trove for home improvement seekers on a budget. It’s also familiar territory for the Vodec trio, who choose to volunteer at the store on a regular basis. Restore relies on volunteers to help staff prepare donations for display, assist customers, keep the store clean and organized, and even help with special events.

“Volunteering opportunities are incredibly important for our consumers because it gives them a sense of accomplishment and, in some cases, provides them with the opportunity to learn soft work skills,” said Central Iowa Services Operations Director Sheila Gathercole, who oversees Vodec’s Urbandale location.

Upon arrival at Restore, the three volunteers make their way to the back room to clock in and receive today’s task – sweeping the store’s massive aisles. Each grabs a broom and is eager to begin. Vodec Day Services Assistant Mark Morris, also the group’s driver, follows along with a large dustpan. He is at the ready to answer questions, provide direction if needed and offer praise for a good effort.

“I like picking up the dirt,” says Ronnie, who works closely with Mark. Craig is eager to point out two men he calls his bosses – a pair of Restore employees in blue T-shirts with welcoming smiles. Sam concentrates on maneuvering his 36-inch push broom through the packed aisles, careful to avoid any customers stopped in front of an item they’re considering.

After 30 minutes of continuous effort, Sam, Ronnie and Craig put away their work tools and say their goodbyes to the Restore staff. On the drive back to the development center, they talk about what they did. Everyone gets a high five from Mark as they exit the van.

Gathercole launched the volunteering program in 2017 as Vodec’s sole day services employee in Urbandale. She helped establish the current day habilitation program as a day services supervisor and was named Central Iowa Services Operations Director in 2019. Goodwill of Central Iowa in Waukee and New Hope Bargain Shoppe in Perry were the first businesses to serve as volunteering sites for Vodec consumers in October 2017. Gathercole then established a partnership with the Greater Des Moines Habitat for Humanity Restore the following month.

Then COVID-19 hit, and Vodec’s volunteering efforts ended at all three locations for safety reasons. Consumers just began volunteering at Restore again in July 2021. Gathercole said she hopes to reconnect interested volunteer consumers with Goodwill and New Hope in the coming months.

Many of the Urbandale development center’s consumers refer to volunteering as their job or their work. Opportunities to volunteer are offered twice a week, and those interested can sign up as often as they like. “It’s so rewarding seeing the smiles on their faces when they return from a volunteer activity,” Gathercole said. “They’re eager to tell me what they did.”